Worthy Farm in Somerset is best known for being the home of the world famous Glastonbury Festival.

But now it has added another string to its bow as it boasts the largest privately owned solar power station in the UK.

The cowsheds have been covered with a sparkling array of solar panels which are capable of producing 200kW of power, which is enough to power up to 40 homes.

Luckily for Glastonbury Festival founder Michael Eavis, the day of the panels’ unveiling saw beautiful sunshine – something which Worthy Farm is not normally known for.

“Yesterday it was raining and covered in clouds so it was a really dark and dingy day and we were getting 37kw from this without any sun. It’s extraordinary,” he said.

Turning the land from a festival site into a power station is all part of Glastonbury’s green ethos.

At the unveiling, Mr Eavis defied the bitter cold by wearing his uniform of shorts and a jumper.

He said: “With the energy crisis we had to do something seriously major as we see ourselves as green campaigners.”

And this is something he has wanted to do for some time.

When the cowsheds were constructed a couple of years ago he had the roof built so it was facing south, the perfect angle to capture the sun’s rays. 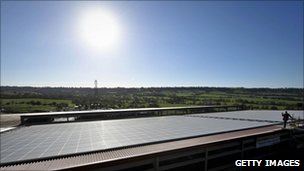 He said he was then waiting for a feasible opportunity to install solar panels.

That came about when the government introduced a feed-in tariff scheme, which rewards people for generating solar power.

Mr Eavis said: “It will take me 12 years to get my money back and I’m getting on a bit as you can see so I will have to live long enough to make a profit out of this scheme.”

After explaining the benefits of the panels – “there’s no moving parts, there’s no smell, there’s no noise… it’s a very graceful thing” – the 75-year-old said the only downside was he had to make sure he stayed alive to see the benefit.

Although the panels will not be able to provide enough electricity to power the festival, it is hoped that eight generators will now not be needed.

“We want to set an example. I don’t want to sound big headed but we do preach the green message of sustainability.”

Mr Eavis is planning more panels. Even the cows will contribute to his green dream, as he wants to use their methane to generate electricity.

“This is the first stage and we are going to expand it more and more,” he said.

“We’re just beginning on to the path for being fully sustainable – that’s what we’re aiming for.”